Dr. Bryan Seiff is a fellowship trained oculoplastic and aesthetic facial surgeon that specializes in both cosmetic and functional procedures of the eyelid, brow, and face. After graduating first in his class at UMDNJ-New Jersey Medical School, Dr. Seiff completed his ophthalmology residency at New York Hospital-Cornell. It was during this period that Dr. Seiff discovered his passion for the intricate surgeries of the eyelid and face, leading him to pursue specialized, elite training in the field of oculofacial surgery. He was one of only 13 physicians selected from around the country to participate in a two-year oculoplastic surgery fellowship, which he completed at the University of California-San Francisco.

As an oculofacial plastic surgeon, Dr. Seiff performs many delicate procedures of the eyelid and face, including repair of droopy eyelids for improved vision and appearance, removal and reconstruction of skin cancers, improvement of tearing problems, and correction of numerous other eyelid and facial abnormalities. Dr. Seiff also maintains a very strong interest in aesthetic care. This area of his practice includes cosmetic eyelid and facial surgery, as well as non-invasive cosmetic interventions including Botox, fillers, and Kybella. He also directs the Seiff Medispa, which offers a variety of noninvasive skin and body rejuvenation treatments. Dr. Seiff treats cosmetic surgery as both a science and an art in pursuit of natural, harmonious results, and strives to provide the highest level of patient satisfaction.

Dr. Seiff is a member of the clinical faculty at Christiana Hospital, where he is dually appointed in the departments of Ophthalmology and Oral Maxillofacial Surgery. He currently serves as the section chief for facial cosmetic surgery in the OMF department. He remains active in the American Society of Oculofacial Plastic and Reconstructive Surgery, and has served as the chair of the Young ASOPRS committee. He has lectured and presented scientific papers at various national surgical meetings around the country, and has authored numerous scientific articles in text books and journals pertaining to both cosmetic and reconstructive plastic surgery.

Dr. Seiff lives in Wilmington with his wife and two children. His greatest joy is going on adventures or playing sports with his sons and watching them grow. During his spare time, he enjoys reading, golfing, and travel, especially if it involves time at the beach.

Dr. Gillespie was born in Newark, DE and raised in Hockessin, DE. He is married with two beautiful daughters.

He attended Salesianum High School and University of Delaware, where he received his B.A. in Biological Sciences.

Dr. Gillespie always wanted to enter the medical field, but it wasn’t until taking on the leadership role in his clinical anatomy and dissection course in medical school at St. George’s University that he started his journey to becoming a surgeon.

Dr. Gillespie has grown a substantial aesthetic background, including facelifts, eyelid surgery, neck lifts, breast augmentation, mommy makeovers and liposuction. He prides himself on his post-Bariatric body contouring procedures such as breast lifts/reductions, tummy tucks, whole body lifts, arm and thigh lifts. He is also the leading plastic surgeon in the Delaware area offering the “Brazilian Butt Lift.” Dr. Gillespie is also one of the few plastic surgeons in the entire United States offering treatment for a rare but real illness referred to as, “Breast Implant Illness Syndrome.” Dr. Gillespie holds medical licenses in PA and DE and has offices in Wilmington and Dover, DE.

Originally from Portugal, Tania and her family moved to Long Island, New York at the age of seven. After graduating from the New York Institute of Beauty in 2010, she moved to Delaware with her husband to start a family.  Now with over 10 years of experience in the medical aesthetic field, Tania strives to make a positive change in her clients’ lives. Using today’s latest treatments and at home skin regimens, she can customize a treatment plan for each client based on their age, ethnicity, skin color, and skin concerns.  Her goal is to create healthy, glowing skin for all her patients. Tania specifically enjoys working with lasers and other new technologies, including the OPUS plasma, which helps resurface and tighten skin and reduce unwanted dark spots. These treatments help her patients feel fresher, younger, and more confident in their natural, new skin.

In addition to her passion for aesthetics, Tania has a love of yoga, so much so that she became a certified instructor during her aesthetic studies. In her free time she also practices karate, and enjoys walks with her basset hound “Hoot” at Delaware’s state parks and ecological preserves. Thanks to her worldly upbringing, Tania is also fluent in Portuguese and understands Spanish.

Tiffany is a Registered Nurse and Certified Aesthetic Nurse Specialist. After many years working in the Plastic Surgical field as a Medical Aesthetician, Tiffany got her nursing degree specifically with the goal to become a Master Injector. She has spent the past 5 years passionately studying with top Plastic Surgeons. Tiffany is in the Lewes Office on Wednesdays and Thursdays for injectables.

Carolyn Benton is a Delaware native.  She was born at Beebe Hospital in Lewes, and was raised in Bethany Beach.  She remained local to grow her roots in skincare, working full time at the Seiff Center.

Carolyn completed her education at Delaware Learning Institute of Cosmetology to become a licensed esthetician and then ventured to the National Laser Institute in Scottsdale, AZ to achieve her certification to become a  cosmetic laser technician.

Since joining the Seiff Center, she has gained many skills and has mastered new technologies such as the OPUS plasma, Cool Sculpting and Platelet Rich Plasma treatments. She is eager to continue her education and plans to learn new specialties to meet all of your skin care goals.

Outside of Carolyn’s career, she is very family oriented, as she is the youngest of five and loves to spend time with her parents, siblings, nieces and nephews. Most of her childhood was spent in the town of Bethany, on or near the sand. She looks forward to playing at the beach with her nieces and nephew, relaxing under an umbrella or surfing and paddle-boarding with her friends. 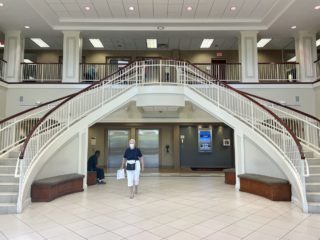 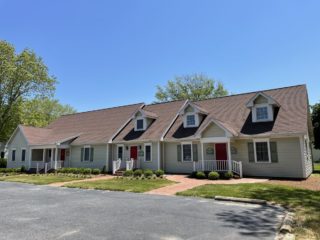